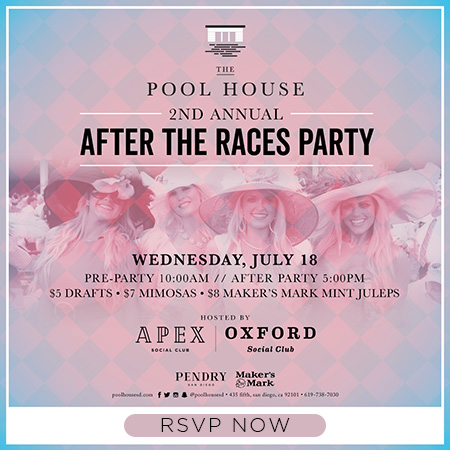 The horses are coming, and it’s time to pony up for a serious party at The Pool House!

In a mere few days, on Wednesday, July 18, the Del Mar Races will open for the season. At The Pool House, we want to help you celebrate all day, so we’re hosting both a pre-party and an after-party at our incredible rooftop venue in The Pendry San Diego. Read on to discover why this is going to be the ultimate summer party!

What are the Del Mar Races?

The Del Mar Racetrack is a thoroughbred racing destination in Southern California. Featuring some of the world’s best athletes, the track has been a destination for sports enthusiasts and party people since 1937!

The track has a storied history. Bing Crosby presided over the opening ceremony in 1937; in 1938, it was the setting of the famous Seabiscuit-Ligaroti match race, which drew a staggering 20,000 to the track. The milestones have kept coming in the years since! Since its opening, the track has enjoyed visits from the likes of Lucille Ball and Desi Arnaz to modern-day celebs. This legendary track continues to attract visitors from around the globe with its sophisticated setting, exciting horse racing, and incredible history.

What is Opening Day?

The Del Mar Racetrack currently operates during two seasons: Summer (from mid-July through September) and Fall (in November). Each year, the first races of the season are marked with highly anticipated “Opening Day” celebrations, featuring races, incredible fashion, and tons of fun.

This year, Opening Day takes place on Wednesday, July 18th. At The Pool House, we want to help you make a day of it! Therefore, we are offering a pre-part and a post-party with bus transportation to and from the track offered, so you can party it up either before or after (or both!) the Opening Day festivities.

Jason “JROC” Craig is a nightlife visionary and one of the partners responsible for dreaming up The Pool House. He’s got an eclectic past: he attended UNLV and served in the Marine Corps, before working at Center Bar, Rehab, and Body English in the Hard Rock Hotel in the early 2000s. By the mid-2000s, he was helping open venues like the Fantasy Tower at the Palms Casino Resort in Las Vegas. Eventually, he would take on the position of Director of Nightlife and Marketing for the N9NE Group; he has also worked with SBE, the Light Group, and the Hakkasan Group. These days, along with partner Ryan Labbe, he’s seen as a premier nightclub venue developer. Since his birthday is right around the time of Opening Day, we’re toasting him at the same time!

Why celebrate Opening Day at The Pool House?

Here are just a few reasons why Opening Day can’t be missed!

1. Make it a full day party. Opening Day at the Del Mar Racetrack is a see and be seen, can’t-be-missed party. Make it even more fun by upgrading it to a full day event! The Pool House is hosting both a pre-party and an after-party to make it a day-long party that you won’t soon forget.

2. Amazing drink specials. Parties are more fun with the perfect drink. As part of our Opening Day celebration, The Pool House is offering a $5 draft beer special, $7 mimosas, and $8 Maker’s Mark mint juleps. Pinkies out!

3. Transportation provided. Get on the party bus! The Pool House will be providing bus service to and from the track from the venue.

4. Birthdays ROC! Adding to the festivities, we’re also celebrating the birthday of Jason “JROC” Craig, one of the geniuses responsible for dreaming up The Pool House. It’s a great day to celebrate everything you love about The Pool House and toast one of the visionaries behind our stellar venue!

As you can clearly see, The Pool House is the ideal destination for Opening Day. We hope that you’ll join us for what promises to be the best party of the summer!

Have you ever attended Opening Day?