San Diego is the place to go when you’re in the mood for an excursion by the sea, and there’s absolutely no shortage of amazing sights to see or activities to keep your days busy, along with a high energy nightlife to keep the party going into the wee hours of the morning. Whether you’re low key, or an adventure seeker, San Diego has something to offer everyone.

There’s also one more irresistible gem that you’ll find at the Pendry, and it’s the hottest rooftop bar in San Diego. During your stay at the Pendry, you’re not going to want to miss the leisurely, sun-soaked afternoons spent at the Pool House.

The Pool House at the Pendry

San Diego is known for a lot of things, and among the ones that you won’t find anywhere else are the amazing views. There’s also no better place to check out these views than the Pool House, which happens to be the premier rooftop pool and bar in San Diego.

Nestled on the rooftop of the Pendry, the Pool House is an open air, contemporary space dedicated to soaking up the sun, relaxing poolside and enjoy amazing food and drinks in either the indoor or outdoor seating options. Unlike other “clubs” in San Diego, the Pool House is a chill vibe, but it’s also where you’re going to be some of the hottest people in San Diego.

At the Pool House, you can sink back as you recover from a night of overindulgence in the San Diego nightlife, or you can meet up with a group of friends and enjoy the VIP life by reserving your own private cabana. You can tip your toes in the pool and mingle, or lounge in your daybed, sipping away at a signature Pool House cocktail. The Pool House is a place where you create your own experience, all surrounded by the gorgeous San Diego skyscape.

Off-Time at the Pendry Hotel Is the Best Time

The summer season has come to a close, and that means that the influx of summertime tourist has slowed to a trickle. Does this mean that the Pool House has quieted down as well? Not at all. In fact, some might say that the off times are the best times at the Pool House. It’s now that you’ll can experience the true luxury of San Diego’s premier rooftop pool, be pampered by the attentive staff, and mingle with San Diego natives, as well as those who are interested in the local culture beyond a little sightseeing. 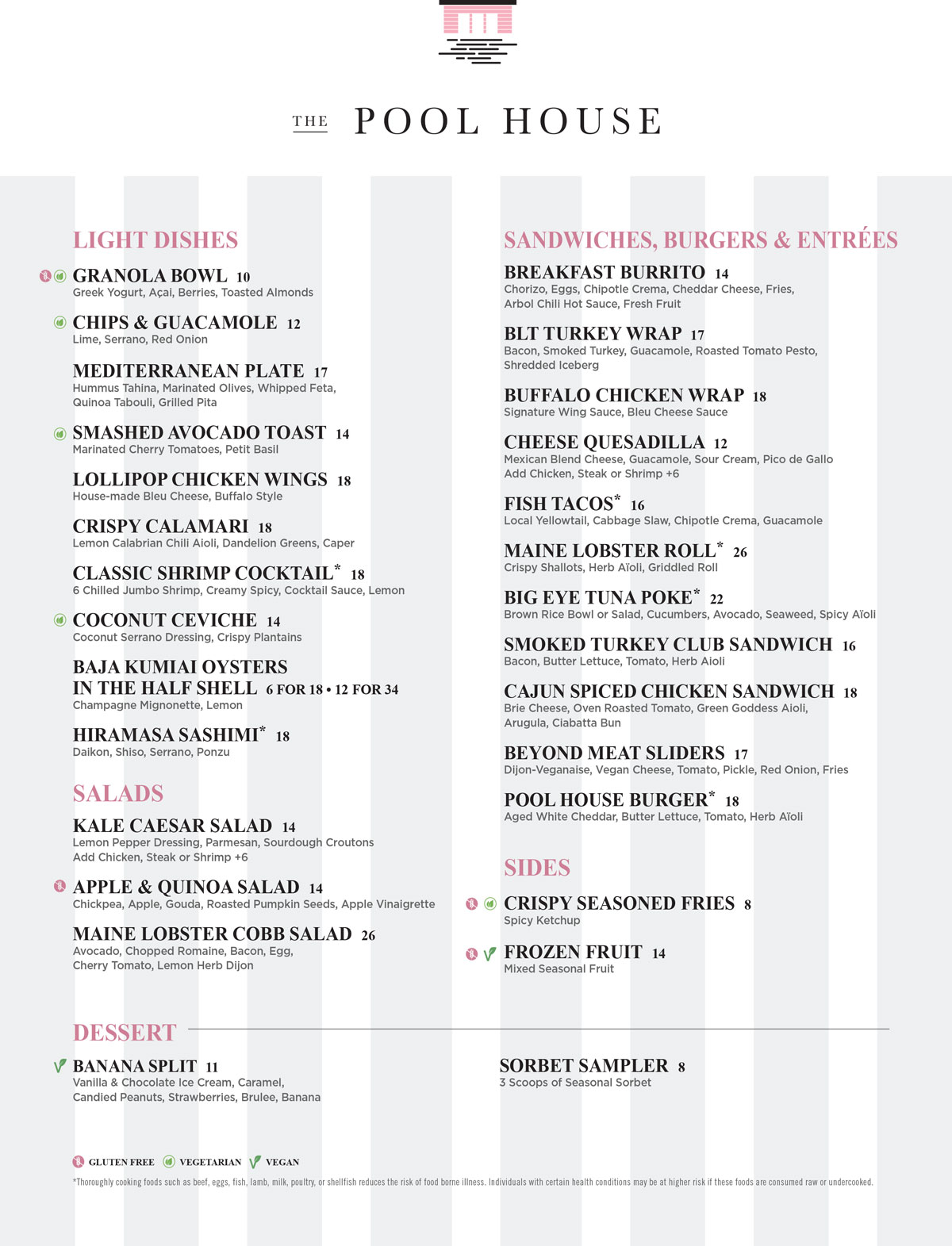 The Spot for Drinks and Nibbles at the Pendry

There’s something indescribable about waking to the San Diego sun, spending a leisurely morning exploring the city or maybe indulging in a few hours at the spa, and then heading to one of your favorite places for nibbles and drinks as you plan out the rest of your day. If you’re nursing a hangover from the night before, then this sounds all the more appealing.

The Pool House on the rooftop of the Pendry is the perfect place to get your nosh on while sipping on a signature cocktail – or two. The menu at the Pendry features light dishes, salads, sandwiches, and entrees, all of which are perfect for an afternoon meal or sharing with friends. From classics like the Pool House’s Mediterranean Plate and Lollipop Chicken Wings, to more decadent selections such as Coconut Ceviche and Maine Lobster Cobb Salad, you’re going to find exactly what you need to satisfy your appetite and prepare you for a day of San Diego adventures.

What about the cocktails, you ask? Trust that the masters of mixology at the Pool House spare nothing in making sure you’re sipping on nothing but the finest mixture of spirits in all of San Diego. A list of specialty cocktails includes the Makers Smash, a Don Sandia, and the Rooftop Spritz. The Pool House also offers an impressive list of beers, wines, and bubblies to enhance your stay at the Pendry.

Are you planning an incredible get away at the Pendry in the historic Gaslamp Quarter? If, so don’t forget to make a trip to the Pool House part of your daily routine. Even if you’re not staying at the Hotel Pendry, you can still make the Pool House rooftop pool and bar your place to hang out all day long. RSVP at the Pool House and make your reservations today.